skip to main | skip to sidebar

What's in a box of peaches?

I was worried that I had bitten off more than I could chew this year, with a giant box of peach seconds from Nicewicz Farm, found at the Arlington Center farmer's market.

Last year, when I bought the same delicious giant box of peach seconds, they were mostly "split pits" that tasted great, but if you didn't stay on top of them would rot very fast from the inside out - one morning they'd look fine, that afternoon only half could be saved. Which was fine when one had a bunch of free time coming up - as opposed to planning to disappear for a weekend of camping.

You may recall that the first thing I did with the peaches (aside from just devouring a few, of course) was a lovely peach upside down cake. I also shared about 5 lbs with a friend who couldn't get to the market as fast as me.

And then, the day before the camping trip, I frantically decided I'd better at least do some canning. So another portion of the peaches got peeled, sliced, then put into a very light sugar syrup and dropped into pint jars, then processed in boiling water and stuck in the pantry. I've never done this before and hope I like the results come winter - for now, I'll just be eating the fresh ones for a few more weeks! 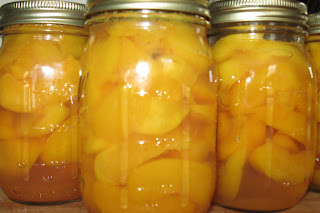 The morning of the camping trip, I cut up a quart container's worth of peaches that looked most likely to spoil soon - I think I'm getting better at recognizing split pits. Then they went into the cooler we planned to bring on the trip. Another dozen or so went into a container, whole, to keep an eye on, eat whole, or perhaps even grill. The sliced peaches became a peach cobbler, cooked over a charcoal grill at the campsite in a cast iron dutch oven. The whole ones landed in our breakfast oatmeal, as well as in the bellies of a number of little girls. We managed to bring a few home, even - and successfully returned home to find that the remaining peaches in the bottom of the box were still fine as well. It turns out that this year's batch was not so many split pits, and more peaches with little blemishes on the skin or bruises acquired during picking, so far fewer of them were little ticking time-bombs.

So next up: peach cardamom jam, with a bit of grated ginger, an equal amount of sugar by weight to the fruit, and a generous amount of cardamom, freshly crushed from the pods. I used about 3.5 lbs of peaches, after chopping and peeling. Even the ginger was local - harvested last year by Old Friends Farm and saved in my freezer. I haven't had a problem with stone fruit jams without pectin, and I do use plenty of sugar, and in cool weather I don't even get impatient letting it cook long enough to set. 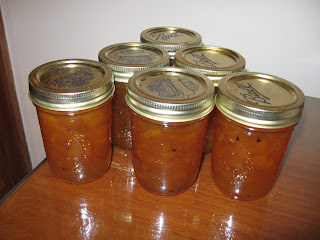 That left a few more peaches for eating, and just enough to try making some delicious-sounding spiced peach muffins - a huge muffin recipe from King Arthur Flour, with tons of flour, that supposedly freezes well. And a great snack for when friends were coming over for the afternoon - they could finish baking and be ready just in time for afternoon snack. Well, a fine theory, except that I seem to have invented a strange batch of sugar-free muffins, after being sure to hit the supermarket to replenish our brown sugar and everything. The doorbell rang as I'd just put in all the dry ingredients *but* the sugar, and somehow when I got back into the kitchen I was convinced I'd already added all the dry ingredients. For completely sugar free muffins, they were pretty tasty with all the peachy sweetness - but next time, I'll be a little more careful!

This entry is part of a blogathon in support of Mass Farmers Markets. If you appreciate the markets that help make such fabulous local produce available to us every week during the growing season, please consider donating what you can. The blogathon has been organized by Tinky of In Our Grandmother's Kitchens.

I write about cooking and eating from local, sustainable, independent farms - and how to plan and improvise meals based on what comes in the CSA box. Which in my case currently provides summer produce, 4 months of winter root vegetables, and about 10lbs of frozen meats a month, from 2 different farms. (And I haven't even fully jumped on the bandwagon - I'm taking a break from fish and haven't tried signing up for dairy or grains yet!)